One thing I come across again and again when encountering public attitudes towards gender variant people is just how simplistic a model many people seem to be operating with. In order to illustrate, it might help to briefly consider sexual orientation, the modelling of which has some similar issues;

Everybody knows about the Kinsey Scale of sexual orientation, right? You have 0 at one end, which means you’re exclusively heterosexual and 6 at the other end, which means you’re exclusively homosexual. There’s then a scale inbetween with varying degrees of hetero/homoflexibility and bisexuality. The wikipedia entry I linked to above also includes an X for “non-sexual”.

Most people seem to be able to grasp this model and understand it, and firmly declare themselves to be a zero. Phew, that’s sorted that out then! None of that gayness here, except after a few pints, when they might venture they’re actually a one, maybe. I jest, but Kinsey is a very simplistic model and the way people use it to express their sexuality can often be very simplistic.

Klein extended Kinsey into his “Sexual Orientation Grid”, which was an attempt to deal with some of the shortcomings of Kinsey: Your ideal situation could be different from your behaviour, as could your fantasies, and orientation and behaviour can change over time. 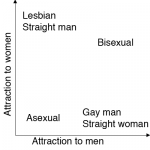 Taking things in a different direction was Michael Storms, who proposed that “attraction to men” and “attraction to women” can be considered two independent variables. I think this improves dramatically on one of the main issues I have with Kinsey and Klein – that they see a spectrum with “straight” at one end and “gay” at the other. Instead, Storms suggests, you can be attracted to men and attracted to women in different proportions. The diagram on the right (click to enlarge) illustrates this. One thing it does which Klein and Kinsey don’t do so well is takes asexuality into account.

These are still simplistic – they don’t take into account non-binary and queer identities, for example, nor do they account for the fact that “man” and “woman” can be broken down into multiple attributes in their own right. Someone can, for example, be attracted to a person with very large breasts (to the point of a fetish – something else none of these models handle well), but be less concerned with other aspects of “femaleness” in a sexual partner.

Regardless of their shortcomings, I think people can generally understand them and realise that there are bisexual people (Kinsey), that you can fantasise about same sex encounters while being straight (Klein) and even that you can be independently attracted to men and women, or not (asexuality). Many people will have a conservative reaction to anything other than Kinsey (or even anything other than heterosexuality) and declare it to be nonsense, or perversion, or symptomatic of pathology, but they can usually understand it.

What depresses me is that while Kinsey has penetrated (oh shush) the public consciousness, and refinements on it can be understood, the same can’t be said for gender. 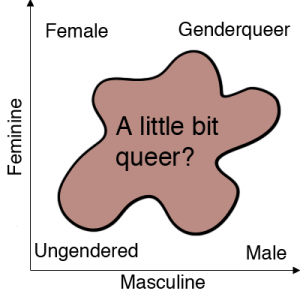 A grid for just one aspect of gender identity?

From my perspective, I see that there are multiple variables to gender. You can have identity, visible expression, behavioural expression, and so on. Like Klein, each one of these can change over time, can be “fantasised” about, and can be different in terms of expression and ideal. We can construct a Storms grid for each one of them; there’s one on the left and each person might have, say, twelve, or something, each representing a different aspect of their gender identity (such as their presentation, or their identified gender, or their desired social gender, and so-on).

In addition, each one of these can be fluid, and there are probably a whole host of things I haven’t thought of. This stuff is rich, very rich. Instead what we get are media depictions and a public discourse on gender variant people which is simplistic to levels that I find incredibly frustrating: trans stories have to be accompanies with photographs or video of over-the-top expressions of stereotypical femininity or masculinity; anyone without a simple, binary identity, is considered too challenging; surgical status is everything, “If you’ve got a penis, you’re a man”; “But chromosomes”, and so-on.

I also get the impression that the more “educated discourse”, which ought to have at least moved to a point where it acknowledges that this stuff might be complicated, gravitates all too often to the sort of navel-gazing narrative employed by the Julie Bindels and Janice Raymonds of this world – Gender is bad, it exists only to oppress women, gender must be destroyed, gender variant people are either trying to prop up male gender hegemony themselves, or are unwitting tools of some sort of psychiatric illuminati with the same agenda, gender variant people can’t possibly have anything to offer progressive thought, we hate trans people.

There’s good work being done on this. I have very little awareness of much of it – I’ve mostly picked up my level of understanding, which I don’t claim to be anything like complete or even particularly sophisticated, from moving in gender-variant circles. It depresses me that even this places me in a tiny minority. Some work is done by gender variant people, some of it is done by academics who haven’t drunk the Raymond kool-aid. None of it gets enough attention, and it seems to me that while public awareness of trans people has increased, public perceptions of the rich tapestry of gender variance and gender identity are resolutely stuck in a sort of intellectual pre-stone-age.

16 thoughts on “Towards a Less Simplistic Perception of Gender”