Yesterday saw my and Sylvia’s 3rd ascent of Via Ferrata Sci Club 18: 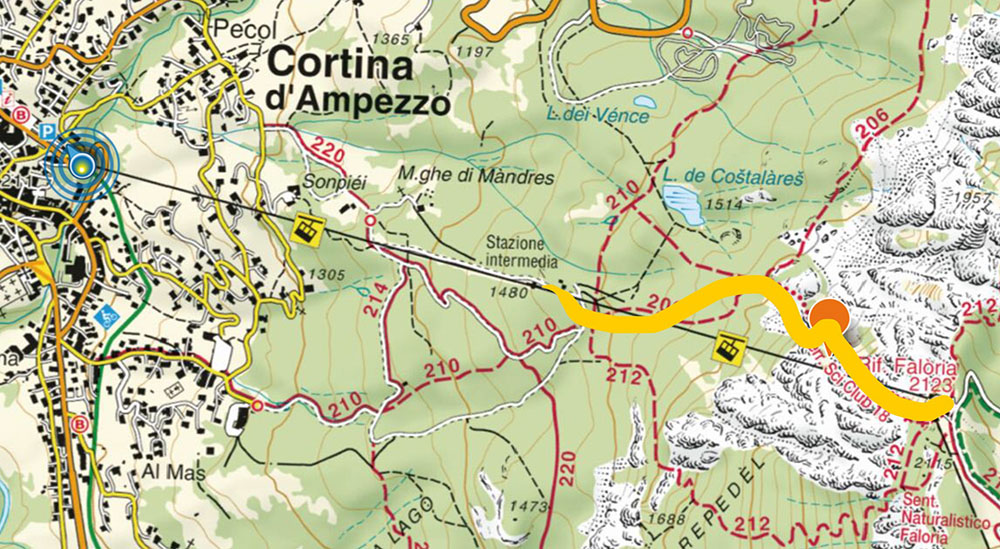 There are a few quirks about this one that are probably worth explaining. The original via ferratas were built as routes that went somewhere and generally provided a shortcut for those comfortable enough with exposure or climbing to use them. Some were simply paths with lots of exposure that had cables for protection, some needed climbing skills. Very few were particularly demanding if you had the most basic climbing skills. Lots of them were interesting ways to see World War 1 ruins, following the equipped routes that the original Alpine Troops built from 1914 onwards.

At the 21st century rolled round, it started to occur to people that via ferrata was becoming an end in itself, rather than a means to an end; people were doing them not because of where they went, but because they were increasingly perceived as an extreme sport in their own right.

So a new generation of “sport ferratas” started to be constructed. The rationale for these was different: they didn’t tend to go to summits or ruins or whatever; they didn’t follow easy ascent paths; they tended to go to mountain refuges, who would often finance their building in order to create extra business.

Sci Club 18 is a sport ferrata. It was built by the Faloria Cable Car Company as a via ferrata route from the intermediate station of their Cortina to Mount Faloria cableway to the top station. In winter this serves as a base for various ski runs. In summer, it hopes to attract walkers and day trippers up from Cortina to its restaurant.

So they built a via ferrata to be an attraction in its own right. You can walk all the way from Cortina, but few do. Instead, if you know to ask at the cableway station (the guide books tell you), the ticket clerk will sell you a “ferrata ticket”. This is similar in price to a single, but is valid for a trip to the intermediate station, and a return trip from the very top. The missing bit in the middle you have to do yourself. 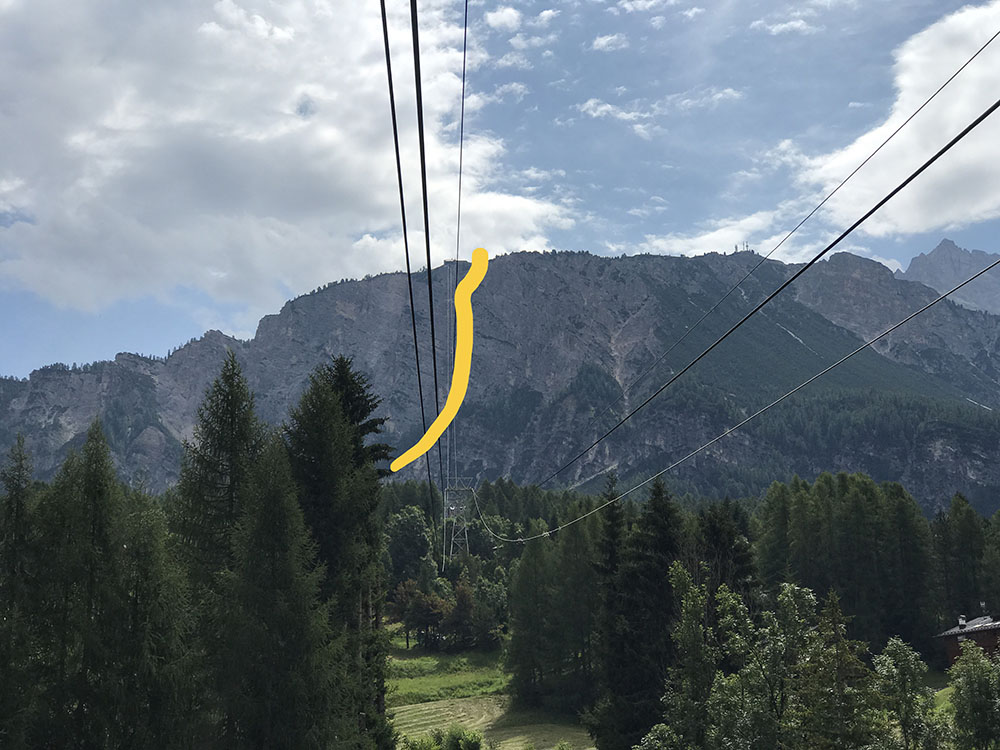 They don’t stop there though; what they’ve done is quite clever. Sci Club 18 is one of the most technically challenging via ferratas in the High Dolomites. It has a reputation that makes people want to challenge themselves. It’s deliberately built to be hard.

And in their final bit of commercial genius, the route it takes is straight up the cliff under the cable car. This means that if you take the cable car up to Faloria for lunch, not only do you get an amazing view of Cortina (which really is a lovely town), but you also get to see daredevil climbers on the sheer cliffs of Faloria as you glide serenely by.

And they own the car park in which said daredevils pay to park too.

This via ferrata is a piece of commercial genius. It’s also massive fun. 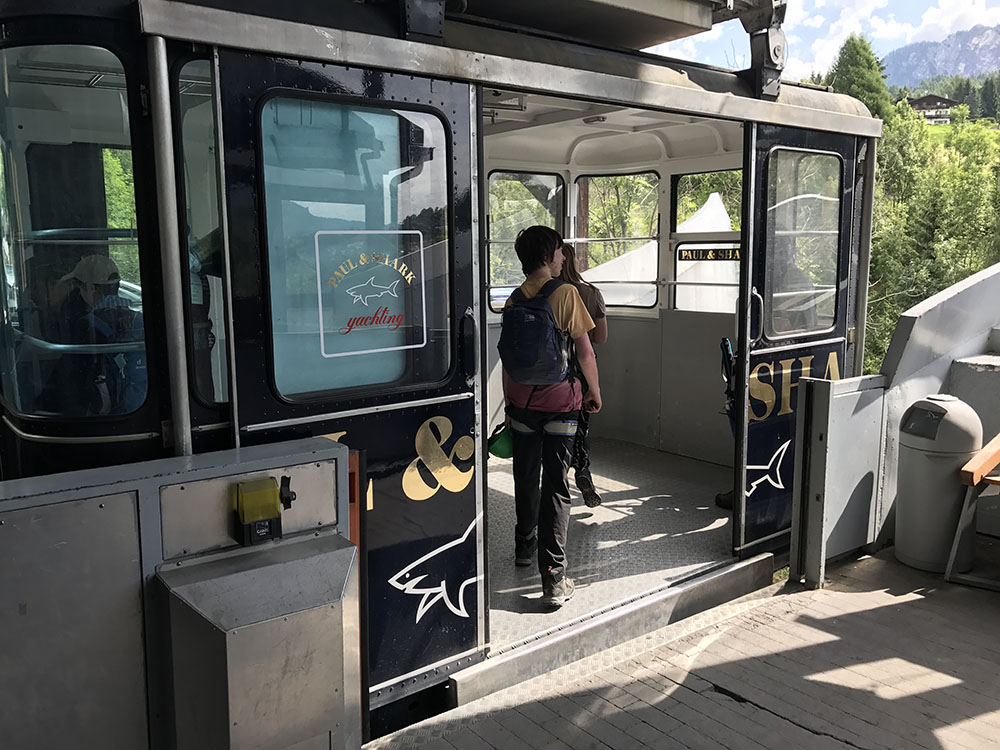 All aboard the classiest cable car in the Dolomites! Energetic young things first!

So Sylvia and I walk into the station and buy a ferrata ticket each for the lift. In there too are a young British couple, also there to do the ferrata. It’s apparently only their third (that’s brave). They’re on holiday from Devon after finishing their A-Levels. We all board the lovely old cable car (seriously, this thing is practically an antique but it oozes class from its sleek curves to its sponsorship from local posh yachting clothing shop, Paul and Shark, and it’s in glorious condition) and are whisked over the outskirts of Cortina, over farms and woodlands, to the intermediate station.

We disembark. Most passengers head for the adjacent car that will whisk them up to Faloria itself. We and the other couple leave the station and start walking uphill. We are soon left in the dust by the other two who are less than half our age and can just power uphill. The approach to this one is a bugger. You rise 200m steeply on switchbacks which seem to never end, as you inch closer and closer to the cliff face. 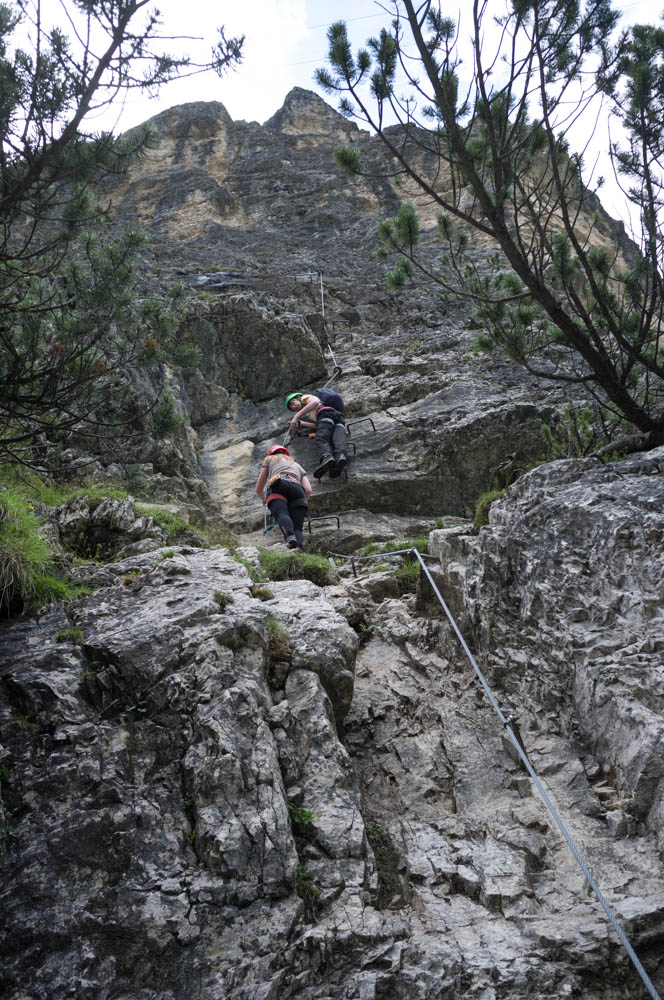 Fit young things on stemples just after the muppet filter. Note how relentlessly vertical it is!

We caught up with them at the bottom of the ferrata, where I opined that I was “getting too old for this shit”. They went first and started up the cable. No gentle start here; the Sci Club comes at you hard and fast with a technically challenging and exposed move round a slight overhang. This is the Sci Club’s “muppet filter” and if it freaks you out, it’s a good point to give up, because it’s not going to pull punches after.

After that, you climb vertically upwards (slopes are for the weak, the Sci Club goes straight up, and sometimes it overhangs because fuck you, that’s why) for a bit and you start to think you’re getting into the swing of things when it throws its next punch: an airy right turn onto a sticking out bit of rock that leaves you with sheer drops on three sides.

The ground is getting far away now, but it’s always visible. Spending lots of time looking down on this one tends to bring to mind endless seconds of weightlessness followed by the immediate pulping of your body on the unyielding rocks below. If heights are really not your thing, do a different ferrata because if you have a panic attack on this one, good luck getting off (options are abseil, if you have a rope; down climb, which is really bloody hard and dangerous; or fish out your mobile phone from your rucksack, without dropping it, and dial 118 for mountain rescue, who will bill you). 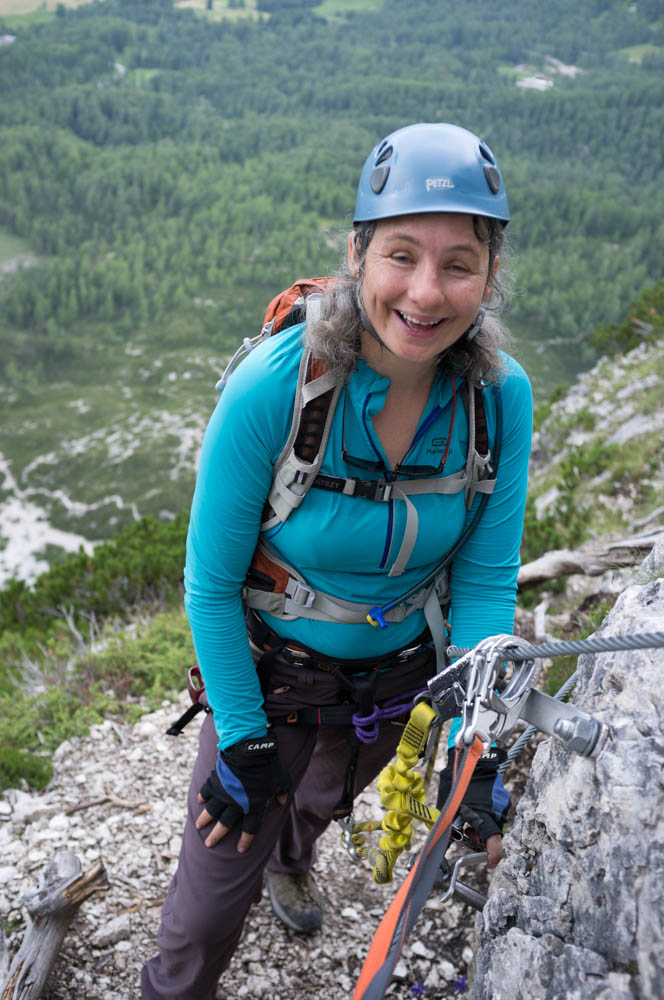 Sylvia takes a breather on a ledge. The drop is probably only about a hundred metres here.

The climbing continues to be steep, but the rock is really grippy and the holds are good, if you know where to find them. You have to trust your shoes here because a lot of the time the Sci Club requires you to plant your foot against steep rock, grab the cable with both hands, and haul yourself up. If your foot pops, take comfort in knowing that this is a modern via ferrata with nice clear fall zones and rubber bumpers on the pegs. You’ll still probably need therapy after a fall though, and your screamer only works once, so you’re back to the whole “dial 118” thing again.

The Sci Club isn’t evil and doesn’t hate you. It does occasionally give you a little ledge to catch your breath without having to hang from the cable in your harness. It was on one of these ledges that we found the girl from Devon struggling with a particularly tricky climbing move. Sylvia and I gave her some tips by way of a demonstration, which meant we got in front of her. At the next ledge her partner beckoned us past, and from then on we were free to climb at our own pace. They may have been young, fit and strong, but we had technique on our side and could move much faster on the rock. 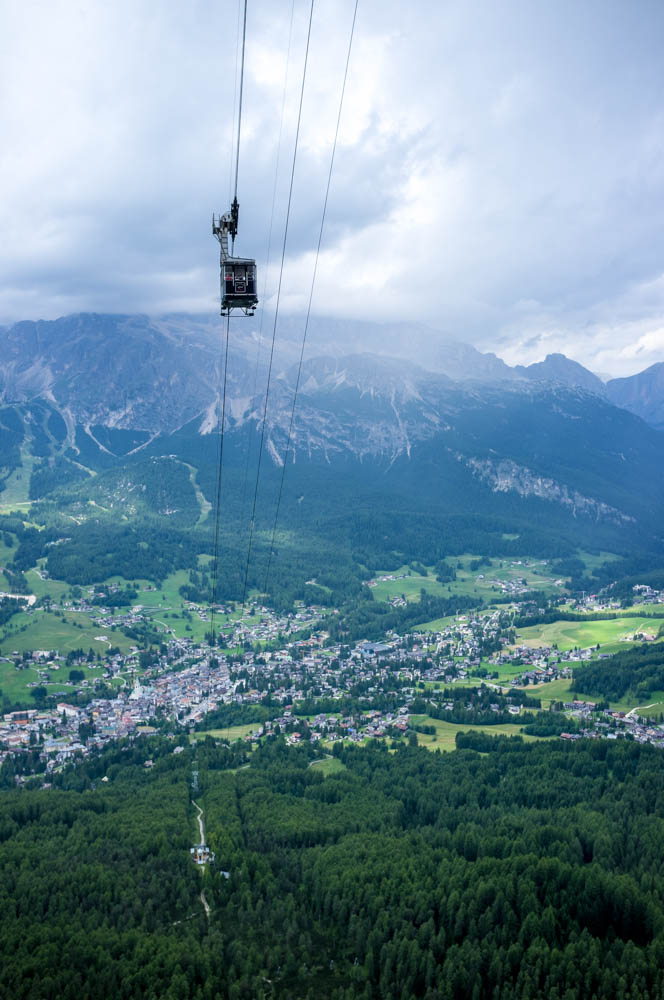 Wave for your fans, and take the time to appreciate how teeny Cortina looks below you!

There was still about 250 metres left to ascend on the cable, and each one was going to be hard fought. While you’re fighting, the cable car comes past. Be sure to wave for the audience! They wave back.

Climb a little higher, and you get more and more overhanging moves, and more and more stress clips (where you have to clip your via ferrata lanyard round a peg while in a stress position, often on a sketchy foothold). The people who built this thing were doing art and their master brush strokes are, about 300 metres up the cable, revealed in an ascending overhanging traverse with multiple consecutive stress clips. Don’t let the presence of the stemples fool you; this is seriously hard work which gives you little choice but to hang your entire body weight on the cable. Purists hate this, as they want to use the cable only for protection, but that’s not what this sport is about. 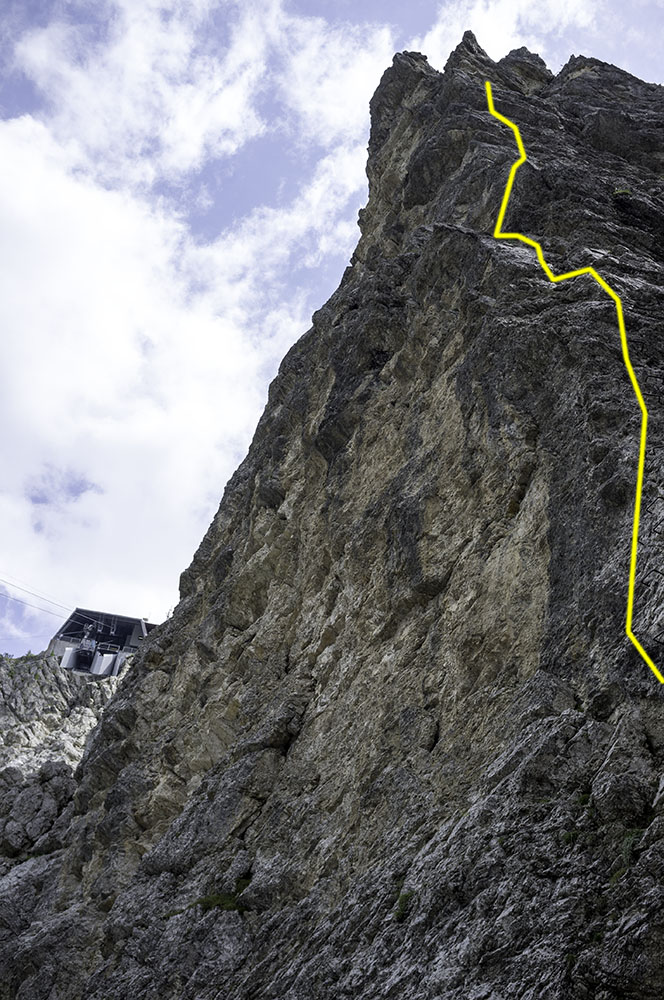 The headwall, cable highlighted in yellow

Eventually, as your quads and biceps burn, the Sci Club relents and suddenly you’re walking on ground that is almost flat! The unwary might assume they’re pretty much done by this point, and indeed as you round a corner you see, tantalisingly close, the upper cable car station (here comes another car: wave!)

Then you notice what the ferrata does. It tricked you! Have another 50 metres of quite hard climbing because fuck you, that’s why. This is the headwall and it’s frankly cruel to do this to the poor climber when she can practically smell the beer.

I climbed the headwall first. Sylvia got waylaid by a rapid German who overtook her half way up it. This gave me time to reach the top, which is another walking section and takes you round to perhaps the best spot to take photographs of your climbing partner on the whole ferrata. I didn’t waste the opportunity! 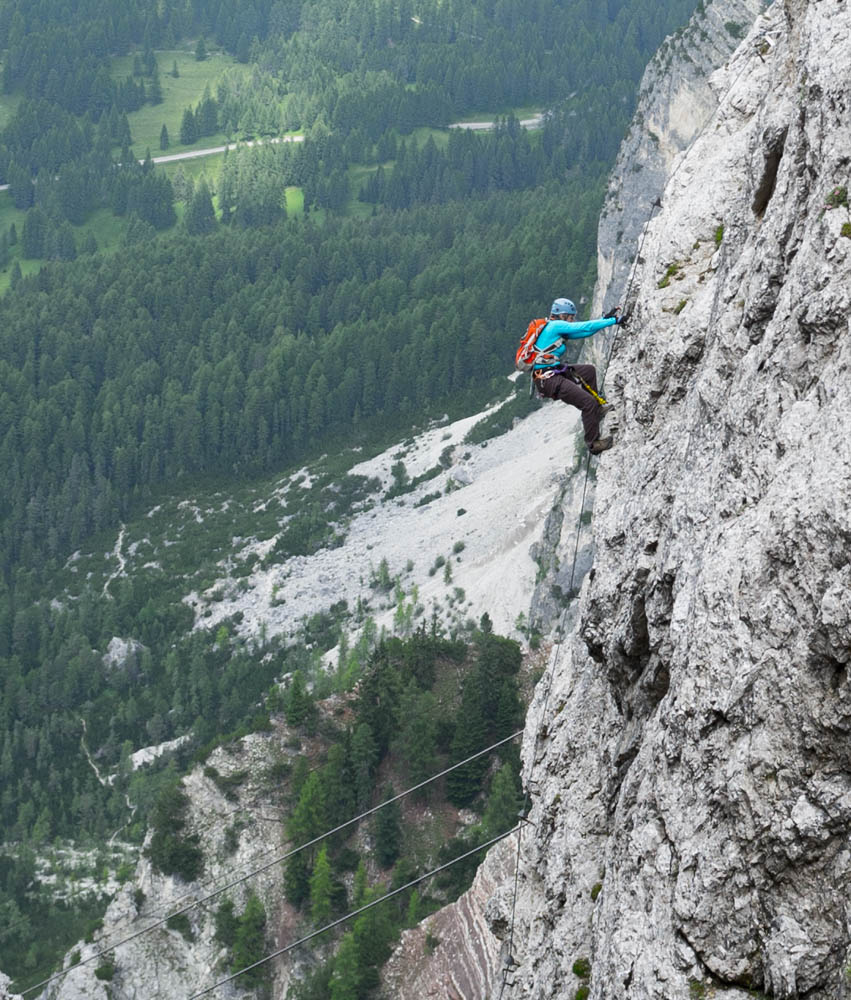 Sylvia tackles the headwall. The verticality of the whole thing is really apparent in this photo. We’re now above the cable car.

After that you’re pretty much done. It wanders around more or less horizontally, or with easy scrambling, to reach the exit point. The cable here is just a token gesture and at points it leaves you to walk several metres on ledges with no cable at all. If you’ve coped with the exposure involved in getting this far, that won’t bother you.

And then, one last push up a 15 metre wall and it’s suddenly all over, and the cable car station and accompanying restaurant are a minute’s walk away. Just as well as it was starting to rain.

The youngsters wandered in about an hour later. They were very wet.

I had a beer and a lovely lunch of lasagna and then we walked downstairs into the cable car. Now we were the spectators and we listened to our fellow travellers gasp excitedly as they noticed two straggler climbers approach the headwall. They must have been utterly soaked. 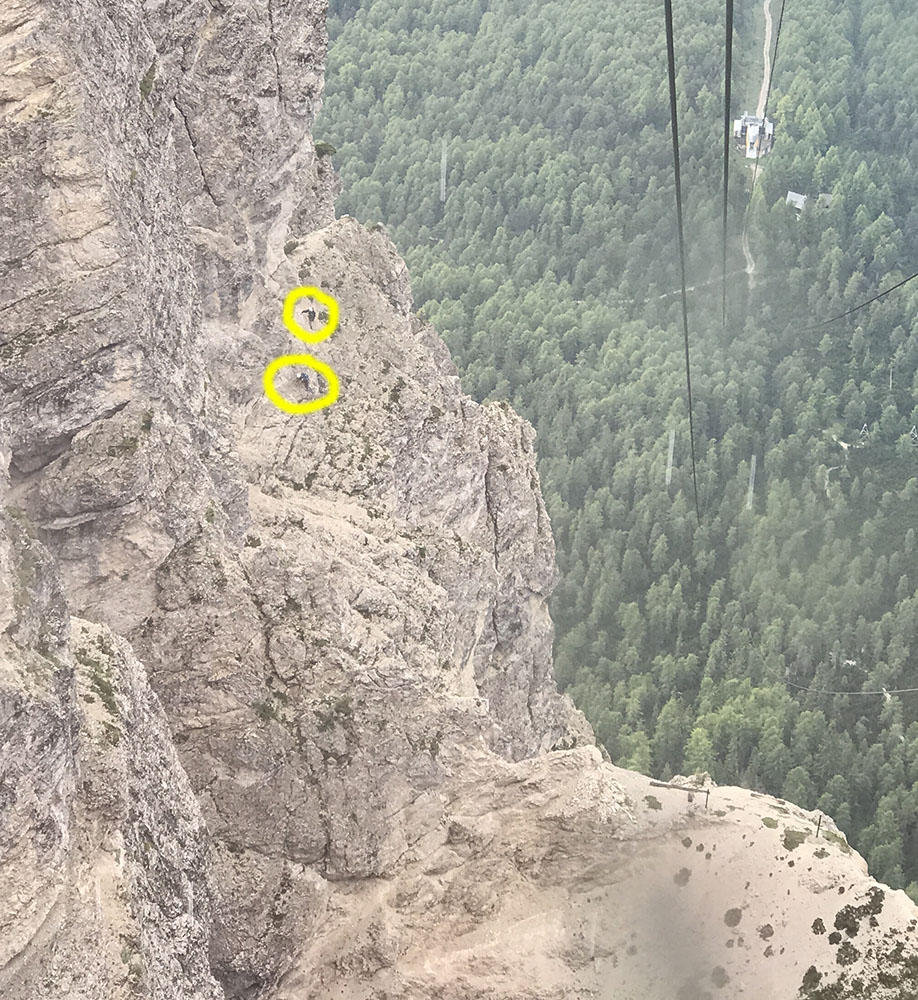 Two climbers, ringed in yellow, approach the Sci Club’s headwall, as seen from the cable car.

I’ll be back for ascent number 4.

Addendum: you may be wondering about the name, “Sci Club 18”. Apparently it’s named after a group of young people who, in 1930, formed a club to promote “the ideals of young people and skiing”. Reading between the lines, the “ideals of young people” seem to have included a strong streak of objecting to the sort of things Mussolini and his then understudy, Hitler, were getting up to. The ferrata apparently follows a favoured ski run of theirs. They must have been bloody good at it!