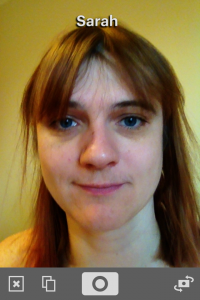 My phone apparently knows who I am

A few things happened to me this week which, together, encouraged me to write this post. First is a little toy app I downloaded for my iPhone. It goes and looks at tagged images on your FaceBook and then tries to identify people in them if you point the camera at them. It works surprisingly well – the image on the right is the result of holding the phone up and telling it to use the front facing camera. The image follows me around in real-time.

The second was a revolting advertising campaign by Irish bookies, Paddy Power. They have created an advert which invites people to “spot the stallions from the mares” at the Cheltenham Ladies’ Day, where “stallions” refers to transgender women in the crowd. I won’t go into why this is problematic – Paris Lees has written an excellent analysis at Pink News and I would urge you to read it. She goes straight to the crux of the matter:

The problem with “spot the trans lady” though is that, for one person in the game, it’s really not that fun. Ask any trans woman. Most of us, at some stage, have faced the humiliation of strangers playing it on us – Paris Lees

It has also transpired that in an apparent collusion with the Beaumont Society, who are doing well with own goals at the moment, they’ve arranged for numerous transgender women to be planted in the crowd for Paddy Power’s punters to spot. Hilarious laddish fun, especially for those who happen not to be aware of this “game” and are unwittingly dragged into it. If they’re lucky, all they’ll face is humiliation, but these things can turn nasty very quickly.

The third is the unveiling of a high tech advert by charity, Plan UK, which shows a video to people standing at a bus stop at Oxford Street, but only if it determines that they are women. It does this by using biometrics – distance between the eyes, jawbone shape, nose size and shape, etc.. Essentially it’s looking for the absence of what testosterone does to a skull.

Plan claim it is “90% accurate” at guessing the “gender” (they mean sex) of the person standing in front of it. I suspect their tests were using mostly, or exclusively, cis people. Given the stated biometrics are those which can often give trans people difficulty, and which many trans women endure harrowing surgery to rectify, I can imagine the accuracy of the guess is significantly below 90% for trans people.

In other words, this advertising gimmick doubles up in function as a trans person outing device.

Quite apart from the transgender angle, I can’t imagine what Plan UK were thinking. Really, the scene in Minority Report where the protagonist walks through a mall and is recognised by electronic adverts which call to him by name and try to sell him things was, I suspect, penned as a cautionary tale and not an aspirational one.

Imagine if when this technology becomes widespread – a world in which billboard adverts guess the gender of the person looking at them and then try to target ads based on that guess. While this may sound like an advertiser’s dream (I note that gender seems to be the key determinant when targeting ads online – I’m quite sick of sites that know I’m female trying to sell me diets), it’s pretty much a nightmare to trans people, who rely on relative anonymity in crowds to live a tolerable life in a world which is really quite a hostile place to us.

These ads will misgender cis people too, but for trans people, their constant misgendering will serve to confirm the suspicions of the sort of people who still stare at me even now, after six years of oestrogen HRT (at least they mostly just stare now – it wasn’t always limited to that).

This and the Paddy Power stunt seem to be confirming that when it comes to advertising, no idea is too bad, nor too vulgar, nor too invasive of privacy, nor too unpleasant to vulnerable minorities to run. Trans people are an obvious target – a society as neurotic about gender as ours finds us hilarious, possibly as a way of coming to terms with just how much it feels disgust at existence and what we represent. If we can’t hide in plain sight in the safety of a crowd, then we’re easy prey for those who would abuse and assault us.

Putting all this together suddenly caused a light to go on in my head. Technology isn’t inherently good or evil; its what you use it for that matters. It seemed obvious though that we were only a small step away from smartphone apps which didn’t just recognise your friends; they would soon be able to guess the sex of total strangers, based on the same sort of technology that Plan are using. Furthermore, given the obvious public appetite (so well demonstrated by Paddy Powers) for humiliating transgender people by outing us in public, such technology would soon be used to bully people suspected of being transgender.

And then a second light came on – what if I wasn’t just worried about the future? In trepidation, I had a look in the app store. Yes, a “gender scanner” app already exists, and apparently there’s one for Android too. I’ve tested it out on myself, and what it said is perhaps less important than the possibility that it will be used to bully people suspected of the terrible crime of Being Trans in Public.

Along with Paris, I’ve been the subject of “games” of “spot the tranny”. I’ve been photographed on trains by groups of older kids who seem to find the presence of a trans person hilarious. It was pretty humiliating. I fear that the immorality of advertisers and the relentless march of face-recognition technology are only going to make life harder for us, perhaps in ways we can’t fully anticipate yet.

24 thoughts on “Hunting Trans People For Sport, Profit, Charity and Teh Lulz”