I make no secret of my love of hot chillies. Chilli peppers together comprise the genus Capsicum, which also includes sweet peppers (really just chillies that have lost their ability to produce the irritant chemical, capsaicin, which is what gives chillies their heat). Most everyday chillies which people encounter, such as jalapeños or cayennes, are the species Capsicum annuum, which are relatively easy to grow even at the chilly (no pun intended) latitude of Cambridge, which is 52º north.

However, the really hot chillies, such as the habanero, scotch bonnet, naga jolokia and the current record holder, the Trinidad Scorpion Butch T, are Capsicum chinense. Both these species have stupid names; C. annuum is, like all chilli plants, perennial and not annual (this is important). C. chinense was so-named because someone who was presumably having an “unable to brain” moment allegedly decided they came from China.

No chillies come from China. All members of the Capsicum genus are descended from wild plants which originate in the West Indies, Central and South America. The ones we eat are cultivars which have been domesticated over thousands of years. C. chinense in particular comes from Cuba and the Lesser Antilles chain, as well as the nearby bits of South America. This is decidedly tropical, experiencing little in the way of seasonal temperature and daylight variations. They are used to growing in hot, bright, sunny conditions, and they’re fussy about it.

They hate it here. They’re difficult to germinate (naga jolokia won’t unless it spends about 6 weeks in soil which never drops below 28º), make tomatoes look frost tolerant and prone to dropping their fruit at the first sign of environmental stress. C. chinense is a true princess amongst chillies.

Which, along with their blistering heat and amazing fruity flavour, is what makes them so much fun to grow.

Despite the crappy year we have just had, what with it missing a summer and all, I have managed to grow a few viable habanero plants from seed (I started in late 2011) and had a half-decent crop of fruit. Now I’m thinking of next year and since I have some proven producers that managed to withstand a few months in my garden in one of the wettest summers on record. I am keen to keep them. Starting from seed each year is a drag and shortens the time they have to produce fruit. 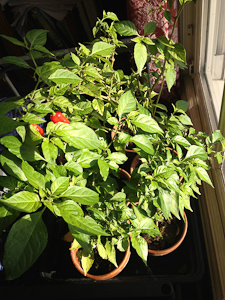 The survivors are sitting on a windowsill in my dining room, enjoying direct sunlight. They’re a bit pot bound, so once I have all the remaining fruit from them (they are still flowering, but don’t seem to want to produce fruit at the moment, even when fertilised), they will be severely pruned back. This also keeps them a manageable size because there are six of them, and the window isn’t very big and chillies can make rather large houseplants if you let them get out of hand.

In addition, I have planted some naga jolokia seeds for next year. I’ve got 20 seeds, and this variety is so fussy that I might not get a single plant. To give them their best shot, I have them in a heated and thermostatically controlled propagator. They only take up half the room though, so it gave me an idea… 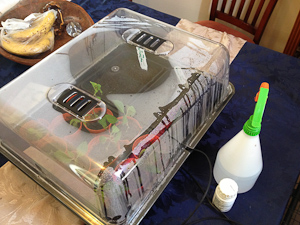 My propagator, with cuttings and seeds, kept snuggly and warm!

Since chillies are perennial, and even though they’re reluctant to fruit at the moment, my habaneros are producing copious amounts of new foliage, I have decided to try my hand at cloning them. A bag of seed compost, a few small plant pots and a tub of rooting hormone later I now have cuttings from my most prolific and tasty performers sitting alongside the (hopefully) germinating naga jolokia seeds. The plan being that each year I can have a stock of plants which can live outside in the summer. In winter I will take a few in, cut them back and overwinter them on the windowsill. In the meantime I will take cuttings from them and clone them in my propagator, ready to have a fresh bunch of plants to put outside the moment the conditions become right (hopefully around April).

In the meantime, I will keep the cuttings and the overwintering originals pruned back so they’re nice and small and manageable and not competing for every south-facing window in my house.

It’s too early yet to say whether this will work, but I have high hopes. Wish me luck! I’ll report back in the spring.