We arrived in Corvara late last night. Well, it was late by South Tyrollean standards. The restaurants were all closing and everyone was getting ready for bed. It was 8pm. We’d planned earlier but our flight was delayed getting out of Gatwick by thunderstorms in France. We did manage to score a hybrid (Yaris) at Venice airport car rental though, and its torquey electric drivetrain works a treat on these alpine passes.

We were just in time to get food at the hotel and we ate a filling Tyrollean dinner of, well, meat basically. Meat and meat with a nod to the whole “technically this is Italy” thing by way of a spicy (German standard, i.e. not spicy) spaghetti and tomatoes.

But it was mostly meat.

The next task before bed was deciding what to do today. The two vertical kilometres we did in the Peak District in the last month have served us well and we are already quite hill-fit. We’ve neglected the climbing gym of late though and we aren’t used to altitude. That meant we needed a strenuous but technically unchallenging climb at moderate altitude.

There’s a via ferrata just up the pass from our hotel. It’s a 650 metre climb up the Sella Group’s north face to a mountain refuge where one can have lunch. Unfortunately it’s also just about the most popular VF in the Dolomites and to be avoided at weekends! 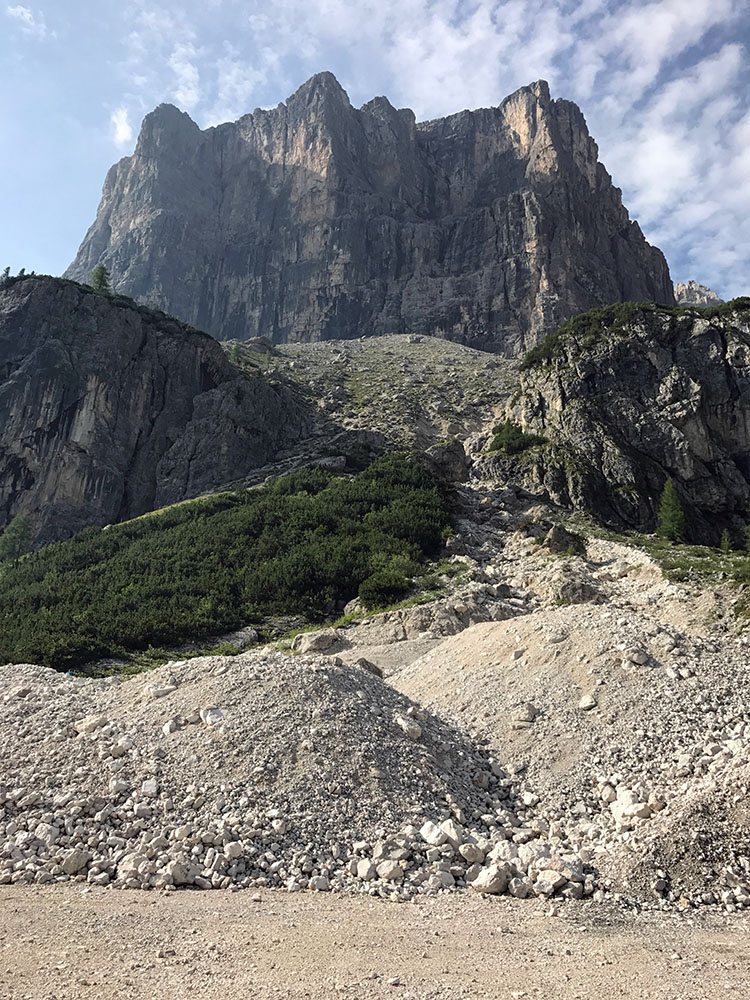 The climb runs up the far left buttress you can see here, just behind it.

It being Thursday we thought we’d be OK. As it was, the car park was full when we rolled in at 9am and the VF did very much resemble a 500 metre long vertical queue. I’m getting ahead of myself though.

The ferrata in question is problematic to name. It’s officially called Brigata Tridentina. For reasons I’m not going into, that’s kinda an Italian nationalist name, and the Dolomites is sort of like Italy’s Wales. This bit of it is predominantly German speaking and so the climb often goes by the name VF Pisciadu, after the river it climbs beside.

We call it VF Bad Flowers, which is a family in-joke, which I’m also not explaining.

So we arrived at the car park and looked up to see part of the mighty Sella Group’s north face looking back at us. Fine, that’s what we’d come to climb. Time to gear-up and consult the map. Both of us have done this route before, but it’s worth being thorough.

Via Ferrata in yellow, possible descent routes in green and blue.

As can be seen, the route attacks the lower cliff almost immediately/ There’s then a flat-ish section where it follows Dolomite path 29 before branching off and doing the bulk of the climb. It finishes at the mountain refuge at just under 2600 metres, and then there are a choice of descent paths. 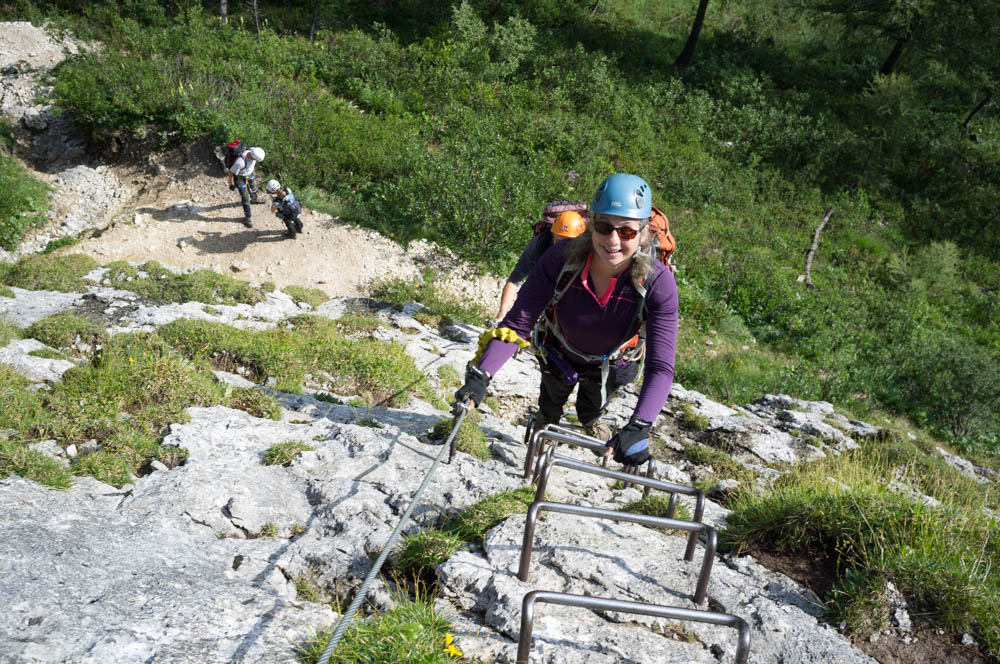 Sylvia on the lower section.

So off we go. It’s a lovely day and the hordes are already gearing up at the base of the climb. We tried to get on as quickly as possible, to avoid being caught up in too many queues. The first section is a very simple 100 metre climb on stemples (steel rungs concreted into the rock). It gets a bit vertical, but it’s basically a ladder hammered into the cliff face and nothing challenging except any nervousness around heights to deal with. I don’t entirely approve of this, as a lot of novices decide to try this route at the end of their holiday, as their first “big climb”. Lots of via ferratas have a “muppet filter” where it throws something really nasty at you at the start. This does not. It starts out easy and just gets harder and harder, ending up with a few sections that are going to be very challenging for anyone not used to moving on rock faces. 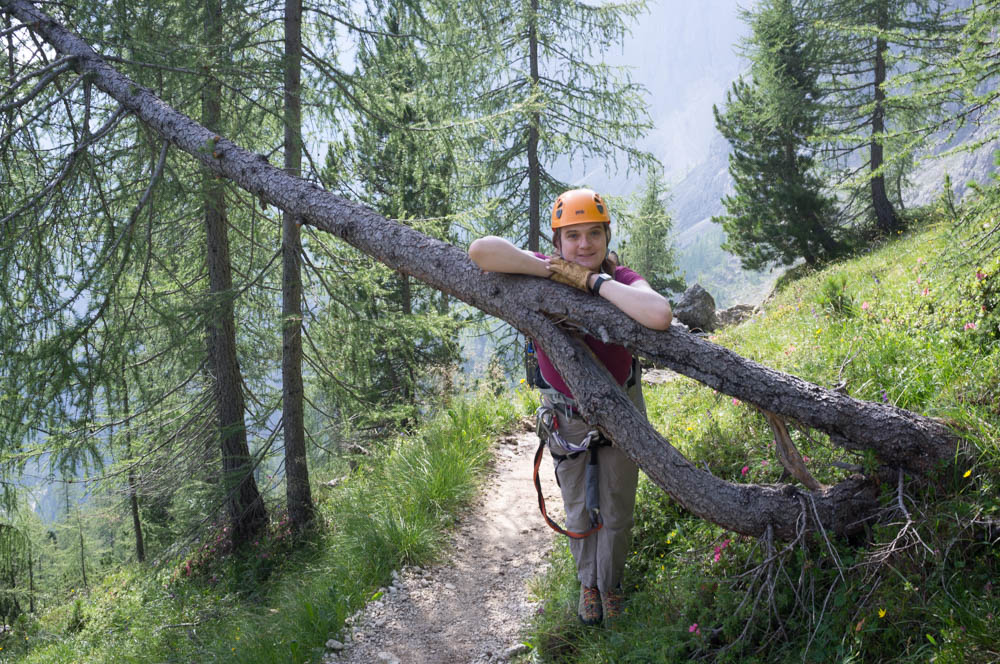 Woodland walk between the two sections.

I took lots of photographs. This is because we were’t moving very fast. It I looked up all I saw were the bottoms of a dozen or more climbers ahead of me. Some of them were moving very slowly, and overtaking on a via ferrata is not always easy. As a result, we waited and admired the view. This section is short though, and you’re soon off cable and onto a nice walk through the tree line until you reach a signpost directing you left to the bulk of the ferrata. 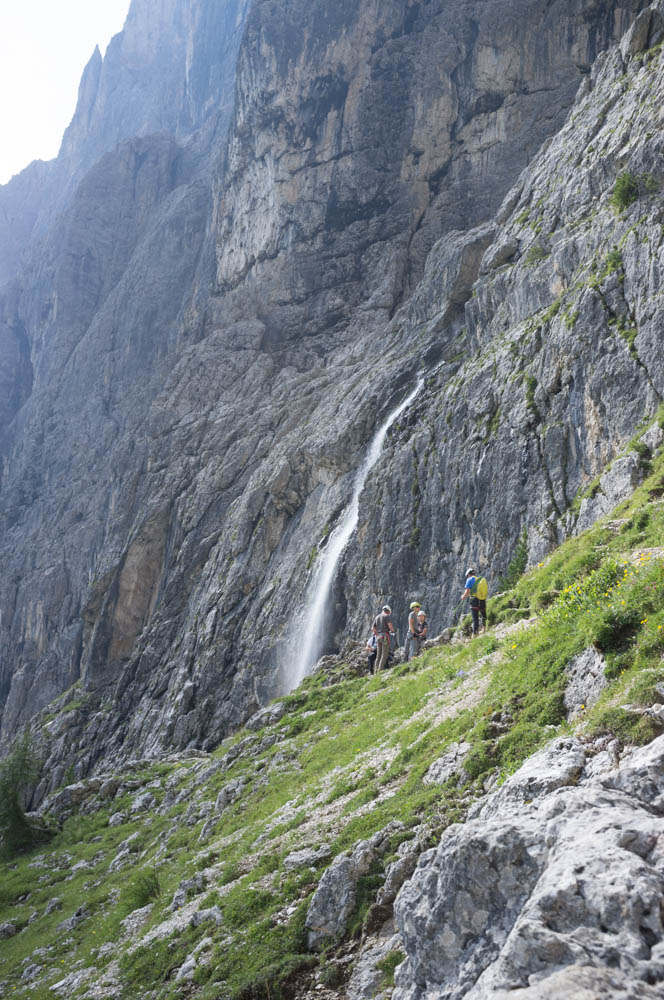 Lower Pisciadu Falls. The route goes straight up the cliff to the right of them.

As you round the corner you’re in for a treat. To the left of the point where the cable restarts is the river Pisciadu engaged in a bit of verticality, something it does a lot on its rapid descent from the Sella plateau. The waterfall is quite impressive and the first of three the climber will encounter.

A few people were standing around looking thoughtful (the thought presumably being “am I going to die here?”), so we bypassed them and got back on the cable. Now we found ourselves behind the second type of person you don’t want to get stuck behind on a ferrata. The first is a newbie who can’t climb well and may well freeze and lose their bowel contents at the exposure (it happens). The second is the sort of person who is confident at climbing, but thinks they’re above using proper gear.

I should explain. When you fall in a normal climb, the rope is stretchy, and the entire length of the rope expands to slow you down. This is actually pretty comfortable, even on the really huge climbing falls. The gear is designed to dissipate the forces. A via ferrata can’t do that because there’s no rope. Instead, if you fall, you will slide down the section of steel cable you’re connected to until you hit a supporting peg. You will then come to an abrupt halt and if the fall is more than a few metres, you will die.

Via ferrata was quite a dangerous sport well into the 90s, where the survival rate from falls was often described as “not as high as we’d like”. Various things were tried to make falls safer. Newer ferratas are built with fall zones clear of rocks and often with rubber shock absorbers on the pegs holding the cable. The gear has evolved as well. The early intrepid ferrataist would use two slings with a carabiner on the end of each. When they came to a peg, they’d detach, one carabiner at a time, from the old section and attach to the new. If they fell, the slings would snap with the shock load and they’d die. 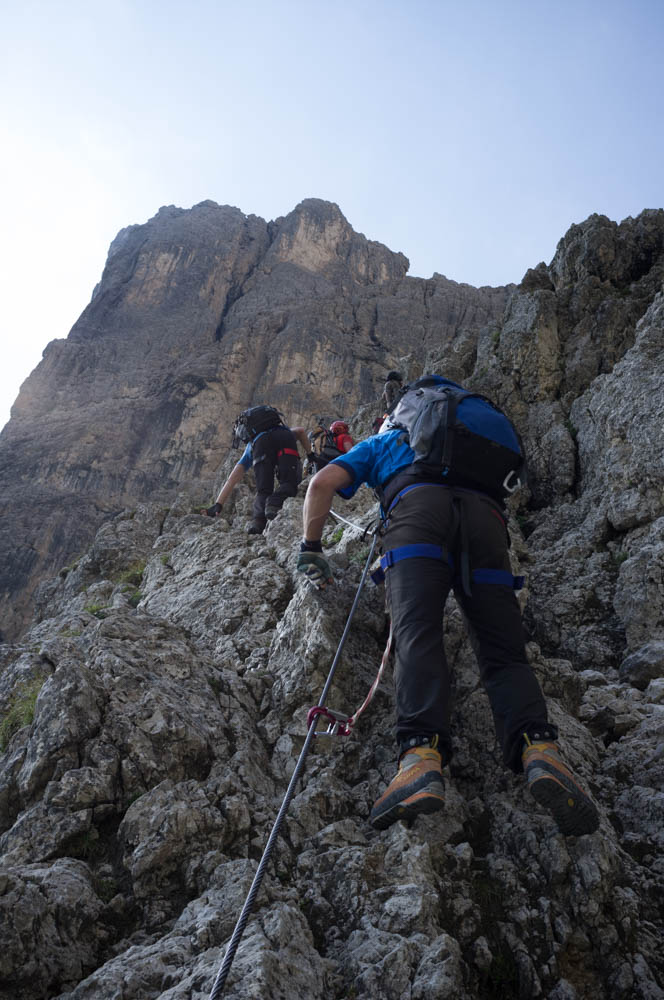 If this man falls, he will die. Silly man. The correct gear is cheaper than his life is worth.

Now we’ve basically solved this problem. We still use two slings, but they’re connected to your climbing harness by something we call a “screamer” (because of the noise you make if you ever need it, presumably). This is a flat loop of webbing with one end attached to the slings, and the other attached to the harness. The two halves of the loop are then sewn together using thread that is designed to break at loads of above about 1200 Newtons (if you’re heavier than that, don’t rest on them). The idea is that if you fall, and your carabiners come to an abrupt halt at the peg, the screamer will deploy and instead of dying you will experience a significant G-force for an instant as it slows you down over about a metre. This is a one-time thing. It you use it once, you throw the gear away.

The guy above me, one of a group of 3 Germans, had a single dyneema sling girth hitched to his harness at one end and a carabiner at the other. If he fell, his back would break, and then the sling would snap, and then his rapidly dying body would plummet onto me, deploying my screamer. I would bot be best pleased.

So I tried to keep out of his fall zone. 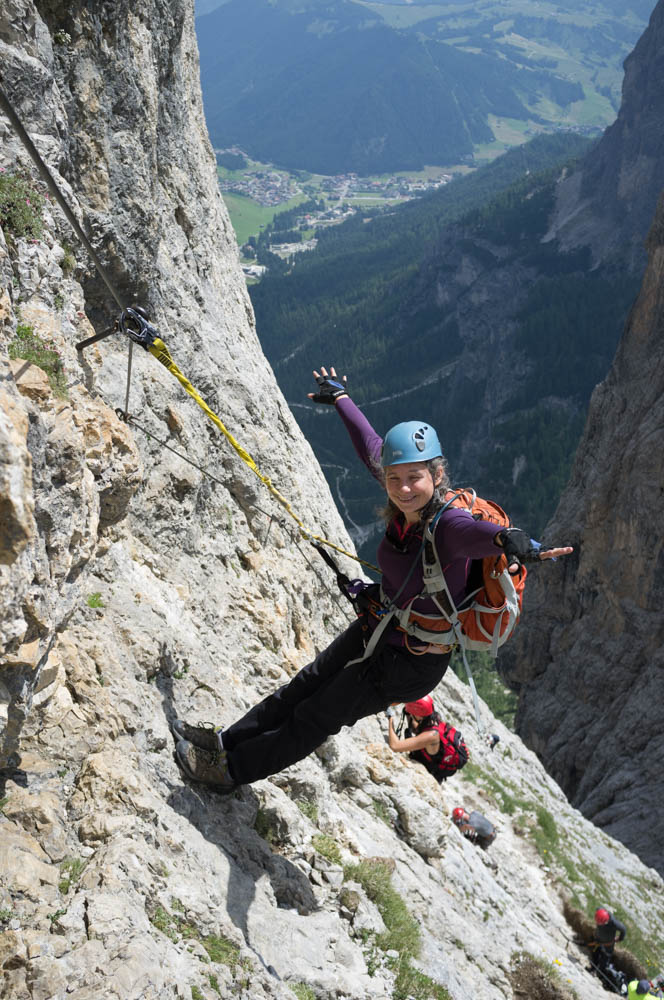 You find things to do to amuse yourself while queueing on a mountainside.

After about an hour of queueing, you come to a point where you can leave the cable. You’re nearly at the tope here, and there’s a sign directing you to “easy climb to top”. Lots of people elect to take this. Some of the ones who really should take the hint do not.

Our Germans had vanished at this point. A lot of people detach from the cable for a bite to eat. Instead there was a middle aged couple, the woman in front, the man behind. They seemed to be finding the going, which had got very vertical at this point, quite tricky. The queue slowed to a crawl as people floundered above us on a properly vertical section, only without stemples. The poor lady in front of me started making whimpering noises. I don’t think she was having a happy time. Shortly after, her husband’s shoe fell apart! 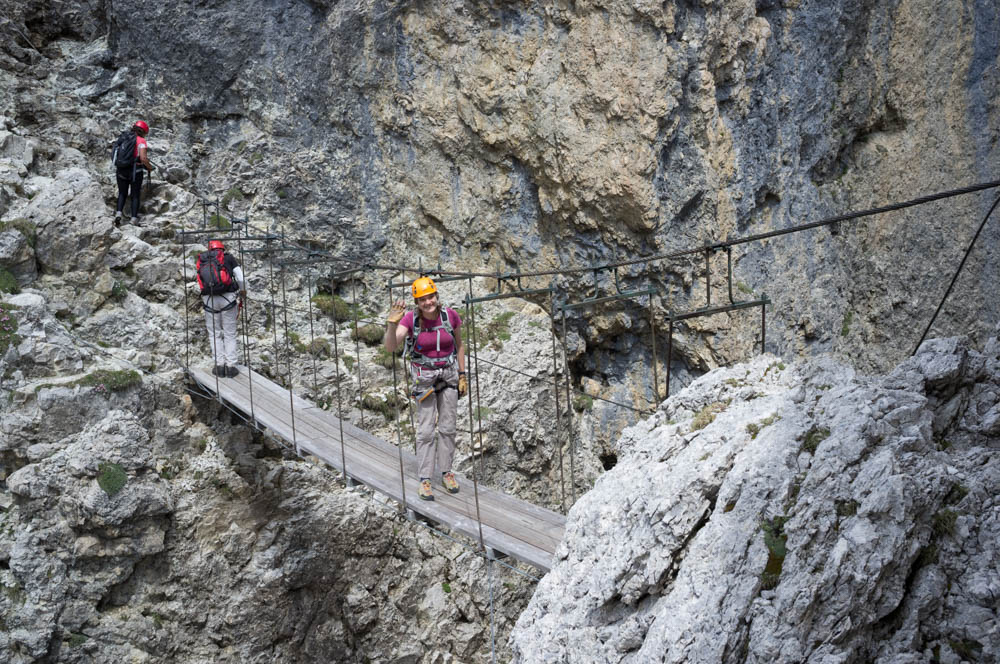 This is one of the more substantial bridges over the void you get here. Some of them are far more entertaining.

Not ideal, but at this point you’re basically done, save for the crowd pleasing suspension bridge over the void. Cross that and then walk to the mountain refuge for a well earned lunch. I had a beer and we both had dumplings in broth (a local specialty), before deciding to head down.

Remember the maps with the routes? The standard descent is marked in green. You zigzag down a steep scree filled erosion gully until you’ve descended 650 metres, and then you’re done. The descent is a bit soul destroying though: endless switchbacks of scree, scree and more scree.

That’s the way we’ve descended previously. The blue one, advertised as a bit longer, but a picturesque amble down a lovely valley, sounded enticing and it was still only lunchtime. Why not? 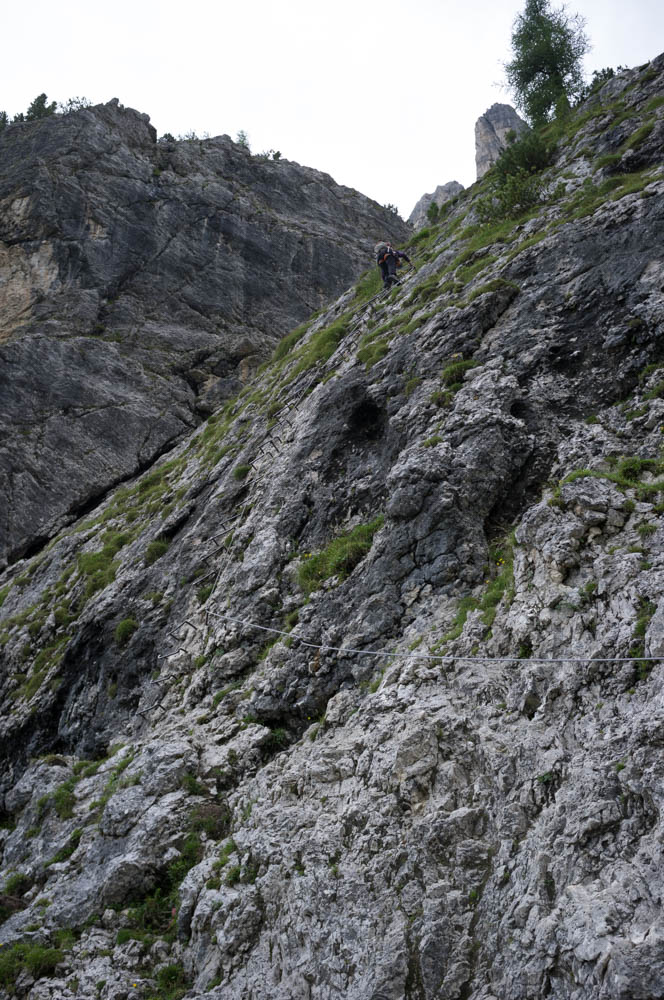 Yes, reversing back down the via ferrata avoids the crowds, but there’s a reason they all went the other way.

Basically, false advertising is a thing. It’s a walk to a steep chossy porto-scramble down into a scree-filled erosion gully, which you descend for a few hundred metres. This takes ages and leaves you on the broad flat section between the two bits of ferrata, only about a mile down the valley. You then reascend for a while until you cross your former path and are presented with the choice of ascending a bit more to reach the other descent path, or down climbing the (now thankfully deserted) lower section of the via ferrata.

We opted to down climb because it was the shortest route, but down climbing a ferrata is a nerve-wracking affair. Stuff that seemed trivial on the way up suddenly seems very hard and accident prone. Still, we made it back to the hotel by 5 and jumped straight in the hot tub. Bliss!

VF Sci Club 18 tomorrow. Now that one does not mess about. 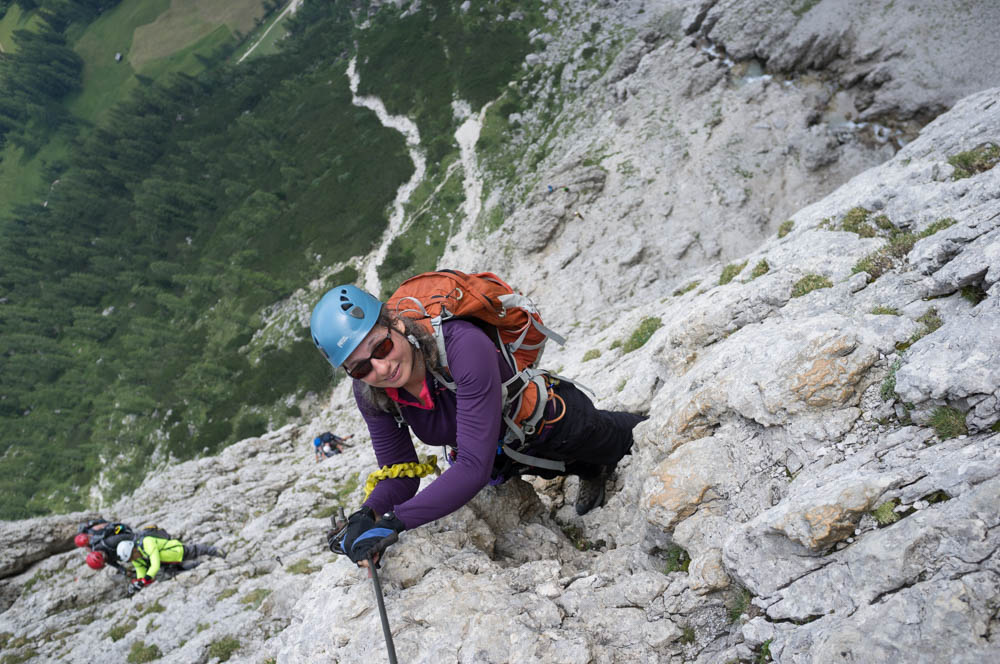 Syliva enjoys an “airy” bit of VF Brigata Tridentina/Pisciadu, with the eponymous river far below.