I’ve been in two minds about publishing this for a while, but friends in the party have expressed a desire for me to do so, and I’ve finally decided to go ahead. This is the speech I wrote, and delivered, at the special general meeting of the Cambridge Liberal Democrat party, called to determine if we wanted to vote for a leadership election. The vote was lost on the basis that now was decided not to be the right time to call for an election. You can imagine that wasn’t the way I voted.

Consider the ideals people have in mind when they vote:

Regardless of how the reality differs from the perception, people at least feel they’re voting for something when they vote for these parties.

Liberals – What do people think we stand for?

Well, what image are we putting out? Is it an image of liberalism? Of staunch defenders of civil liberties? Of a party that wasn’t part of the stale old discourse? This was ostensibly who we were in 2010.

Have we been liberals in government? Really? I don’t think we have.

People do not have that confidence because we, our party, have betrayed them.

As a liberal I believe that the weak should be protected from the strong. That the preservation of freedom is paramount. That people should not be coerced or forced into living in ways they do not want to. That taking away a person’s freedom to live as they will, especially when it is done by the strong against the weak, is a most serious and egregious business.

As a liberal, the reason I want to participate in the process of government is because government is strong. Government possesses tremendous power to shape and affect and constrain the lives of the individual. Liberal government should be a facilitator; liberal government should help ensure that people are free to live their lives without undue restrictions on their conduct, the exercise of their beliefs, and that in a rich country such as ours, people should be free to live their lives, regardless of the circumstances of their birth, free from poverty.

Where the state, or any other strong entity, such as a large corporation, acts to constrain the freedom of the individual, or take it away, that is a very grave matter indeed. It must be subject to due process. It must be seen as a last resort. It must be done in a way that allows the individual in question every opportunity to defend themselves, and when that opportunity is inconvenient to the state, it is more important than ever to stand firm as liberals and ensure it is available.

We need a strong liberal voice in government precisely because, in the difficult cases, when the government finds it really hard to give those it would seek to deprive of their liberty due process, we need to stand up and tell the government, “tough, you can’t deprive this person of their rights just because you find it too hard to grant them”.

It is offensive and intolerable, as a liberal, to have a government rescind that right in my name. There are lines in the sand which we must defend to the last, and not having secret justice, where the accused is not afforded every opportunity to defend themselves, simply because the state finds it hard, is one of them.

I was at Spring Conference in 2013, when one of our MEPs spoke out against secret courts, as illiberal instruments of a state with a cavalier attitude towards exercising its own powers. I was sat only a few rows away when Nick Clegg verbally slapped her down.

It’s not just secret courts, egregious as they are. We have sat on our hands while the Tories waged an idealogical war against the poor, the disabled, the dispossessed, in the name of deficit reduction, when we know that benefit fraud and trying to help people who are otherwise deprived a decent life, through no fault of their own, to live with some self respect has nothing to do with why our economy is in the state it’s in. We, our party, have stayed silent while people have awoken to the disgusting spectacle of one of the richest countries in the world putting spikes outside buildings to deter the homeless, as if they’re vermin.

We should be screaming about these things, and we are not.

Enough is enough. As a liberal, these things are intolerable. That they are done in my name is unbearable.

At the time of the secret courts debacle, some of us in this room, and plenty of people in other local parties, came to the brink of doing something similar to what we are doing now. However, we were persuaded not to at the last minute, with an assurance that our grievances would be listened to; that our leadership would grow a spine and start defending liberal values.

But nothing has changed. Nick Clegg has surrounded himself with people who, I now believe, do not share our values, or at least do not consider them important to draw lines in the sand over, or even advertise them as our values.

We desperately need a leadership who will show people what it means when they put an X next to a Liberal on the ballot paper.

I want to be a Liberal again. I want that word to stand for an assurance that we will not stand silently by and let the strong steamroll over the weak.

I no longer believe that Nick Clegg has any intention of being someone who will do that, and it is with a heavy heart that I say he has to go.

And if that doesn’t convince you, allow me to share a picture that loads of my friends are spreading around social media at the moment. 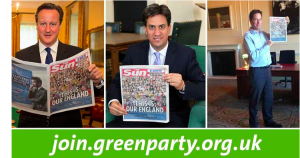 Facebook advert, current at the time this speech was given.