This is the speech I wrote for to address the marchers before London’s 2014 DykeMarch:

It’s amazing to be here, to be surrounded by so many inspirational women. Being invited to speak here is extremely humbling, and I’m a bit nervous, so I hope you’ll bear with me. 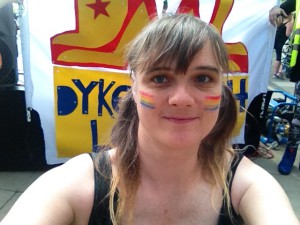 Getting ready for the march

There are those who hold the view that because of certain aspects of my biology, I do not, and can never, truly qualify as a lesbian. There are those who feel this very strongly. Some of them are active in lesbian and queer women’s spaces.

Now I want to stress that these people are, I am certain, a minority. Most lesbian and queer women I have the privilege to know are amazing people who have been nothing but understanding when I explain my situation to them. They have been wonderful, and accommodating, and told me that I am just as much a lesbian as they are.

But there is still a little voice inside my head that never quite shuts up – “they won’t accept you, not really, not properly, because they know, and they are disgusted.”

Make no mistake – this voice isn’t a reflection on any of you – it’s a realisation of my own insecurity, but I think I do have good reason to be insecure.

But there are times when, and this very much depends on the nature of the space, it *is* an issue for me, and for the women who share my secret, and I know it can make other people in those spaces, other women in those spaces, feel a bit awkward. They want to be accepting, but … well, it’s maybe not seen as compatible with how lots of lesbian women live.

That’s just socialising though. I’m in my 40s now, and I mostly can’t be bothered with dating, and with what sometimes comes after – I’d rather have a nice cup of tea frankly, and how many of us can, hand on heart, say we haven’t felt like that on occasion?

But I wasn’t always in my 40s. Back in the day, I remember being with friends in venues which will be known to many of us, but which sadly no-longer exist. I look back with fondness on the Glass Bar, and its amazing location. I really miss First Out, which survived cross rail excavations only to be forced out by rent increases. I even look back with fondness on nights at the Candy Bar, as long as someone else was paying for the drinks, that is.

And these places always had lots of really interesting and cute women in, and sometimes we’d strike up a conversation, and then the dilemma came up.

“Is this going to go further? Might we meet again? Might we even spend the night together? At her place? Oh god, I have to tell her. When do I disclose? What if it’s a deal breaker for her? What if she reacts badly? What if I feel ashamed? I left my pills at home too, and I’ll feel awful by morning without them. What do I do?”

Disclosure of such things is, I think, a deeply personal issue, and I don’t presume to say there’s a right answer for everyone, but I tend to, and by and large, things have been OK.

And so more often than not, when I’ve met someone really great, and when it could go somewhere, I find I’ve chickened out, and I hate that. I hate feeling frightened. I hate feeling like I can never properly belong.

And so, fellow marchers, here is my confession. My name is Sarah, and I, like many other self identified lesbians, through no fault of our own, feel excluded from living fully and openly as lesbians because we are … allergic to cats.